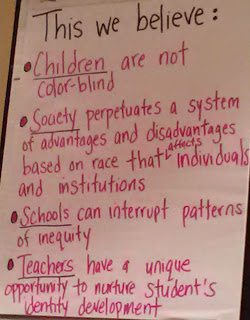 I am back this year for the Save Our School Conference at the Marriott Wardman hotel in Washington, DC. I found last year's conference very inspiring, and wrote about it here, here, and here.

The format was a little different this year. Starting on a Friday afternoon, and jumping straight into sessions, I first attended a session about confronting the issue of race with students in the classroom. There, having been presented with a number of scenarios in which race might come up in an elementary classroom, I had the opportunity to hear thoughts on race and pedagogy from Deborah Meier, Katie Osgood, Jesse Turner, Leo Casey, Susan DuFresne, and Mary Beth Tinker.

There was one scenario, taken from a real classroom with real students, that everyone wanted to talk about. Two black girls in first grade had been asked to create and illustrate a story to present to the class. They decided to tell a story about themselves, two princesses, but they drew the princesses with blue eyes and white skin. When their black and latino classmates pointed out that their representations of themselves did not match their own eye and skin color, one stood in silence and the other began to cry. What do you do?

These are the kinds of issues those of us working in public schools deal with on a daily basis. Many of us believe there is a great urgency to teach students about the roots from which these issues often grow, and give them a more effective paradigm for confronting similar situations in the future.

I recall a situation I experienced working with recently-arrived Dominican students when I was teaching in the Bronx. One of my extremely dark-skinned students was complaining in front of the class about how he didn't feel safe coming to school. He said he was worried about the blacks, who he said hung out in front of the school and beat him up if his friends weren't around. I picked up his arm and looked at it very closely and said, "You're afraid of the blacks??" It's not that I didn't understand that he understood American born, English-speaking blacks to be outside of his identity group. I just wanted to point out that issues of race and identity are complex, and are often unable to be understood within our more traditional black/white/latino/asian paradigm.

Students' capacity for dealing with these issues appropriately, however, is not evaluated on high-stakes tests, which are currently crippling many public schools' ability to provide students like mine with a purposeful, relevant education. Nevertheless, session attendees universally agreed that attempting to address these issues with a bias toward creating tolerance was one of the preeminent tasks of the classroom teacher. And I think that is the major point of this conference: providing educators with support in confronting federally-funded policies that work to deny us the opportunity to do very important work.

The second presentation I attended was about ways for parents, students, and educators to opt out of dangerous federal and state policies that are destroying our system of public education (as Tim Slekar listed them): high-stakes testing, value-added measurements, charters, the common core state standards, and school closures. The presenters were Shaun Johnson, Tim Slekar, and Ceresta Smith; all of whom spoke with passion and frustration.

Tim Slekar talked about the insidious nature of VAM, and the way it's being used to decide teacher quality. He noted that the next step in these schemes is to use the measurements of teacher quality to reward and punish the schools of education that prepared those teachers. He said he thought it was incumbent upon professors in schools of education to lead the charge in the opt-out movement. Professors have a duty to protect their profession and the academic freedom to resist the drive to turn teachers into "data managers."

Shaun Johnson explained he feels uncomfortable in his position as a non-tenured professor of education at an institution (Towson University) moving to align with the corporate reform movement as he continues to criticize the movement's aims and methods. He also confessed his frustration with teachers who are unwilling to speak and act against the corporate reform movement, saying that at some point teachers end up with the system they deserve.

Finally, Ceresta Smith spoke at length about ways for teachers, students, and parents to opt out of unethical practices like high-stakes testing. Ms. Smith, who is a long-time educator and whose own daughter has chosen to opt out of the high-stakes testing in Florida, directed participants to the United Opt Out Website, which gives tips and information for those interested.

Among much of the discussion during the session, Kenneth Goodman's Declaration of Professional Conscience came up. Educators in the room suggested that teachers consider signing this statement, and then, when asked to engage in unethical behavior (like forcing students to take high-stakes tests that may very well be used against them in the way of stopping them from receiving arts, social studies, or science instruction if their reading and writing scores aren't high enough), either point to the declaration they signed OR state that they are being asked to behave unethically and ask their administrator to sign off on that unethical behavior.