Today was the Save Our Schools March on Washington. 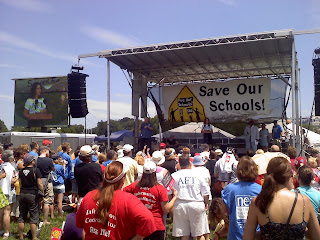 I arrived early and listened to people read powerful passages about the negative impacts of the attempted standardization of schools. Then came the big time speakers. Linda Darling-Hammond spoke first, but I missed her because I was explaining to tourists near the Washington Monument why the march was happening. Mark Naison did an incredible rap on corporate reform. John Kuhn gave a riveting speech that I heard many people identify as their favorite. Kuhn reminded people that public schools take ALL students, not just the ones who are easy to educate. He said he was proud to be unacceptable (the label bestowed on Texas schools when they don't meet annual yearly progress). Bob Schaeffer (the director of FairTest and author of this excellent piece in the Atlanta Journal Constitution in the wake of Atlanta's cheating scandal) spoke. Phoebe Ferguson and Karran Harper Royal spoke together. Jose Vilson prepared what I thought was an excellent poem on testing. Nathan Saunders (president of the Washington Teachers Union) welcomed participants to DC, but he did not tell everyone he's in the midst of a serious leadership crisis at the WTU. Jonathan Kozol gave a similar speech to the one he gave on the first day of the conference. Diane Ravitch said education should not be made into a race, where only one or two people win. John Stewart provided some comic relief from the set of the Daily Show (he wasn't able to make it because, he claimed, a dog ate his car). Matt Damon related a story from his childhood. Apparently Damon's mother refused to let teachers administer standardized tests to him because, she said, they were stupid, wouldn't tell them anything, and would only make him nervous (read Damon's full speech here). 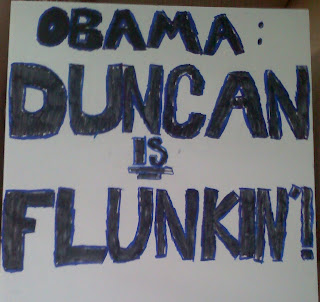 While the speeches were going on, I was lucky enough to run into some great people. I got a chance to catch up with Peter Gwynn and discuss some of the ridiculousness surrounding his being fired for his Mr Teachbad blog. I chatted with a few teachers I'd met at the conference the day before. I engaged a few interested tourists in some conversations. And most surprisingly to me, I ran into my favorite DC journalist, Pete Tucker (who was recently arrested for trying to do his job.) We ran into Candi Peterson together (WTU vice president) and asked about the conflict she's been having with Nathan Saunders. After that, Pete told me about Filipino teachers recruited by Prince George's County and the District of Columbia (officials apparently traveled to Manila in a desperate search for qualified teachers) and are now at risk of losing their jobs. We met one of these teachers who's been teaching in DC. She told us that they're still fighting and that she thought the situation was horrible. The US Government has fined Prince George's County $4.2 million and found them to be a willful violator of federal labor law. I thought the encounter with the Filipina teacher and her story were particularly interesting because just a few months ago I was discussing with a fellow teacher the stages of union busting. First skilled labor becomes unskilled, standardized, scripted, and robotic (and often replaced with machines - think online learning or learning software). Experienced people who'd previously made careers out of such labor are replaced. Short term temps fill the slots (TFA), and eventually people from different countries whose rights are more easily abused are often imported (and then deported in a sick cycle), or the work is sent to their poorer countries where labor laws make it less expensive. It was at that moment the final step in the union busting of the American teaching profession was completed for me. Filipino teachers recruited to the US, hustled through highly qualified certification, and then denied their visas and proper pay. It seems like this should be a bigger story.

After Matt Damon spoke and the march was ready to move on, the SOS planners anticipated that there would be enough time as people left the Ellipse and began traveling toward the White House for some people to read a few more words from teachers around the country. However, participants moved off the Ellipse very quickly and there didn't seem to be a need to fill time. I had been given two teachers' letters to read. Instead of reading them at the march, I thought it would be just as appropriate to share them here.

The first letter comes from David Cohen, a national board certified teacher from California who blogs at InterACT (one of my favorite education blogs). David says: 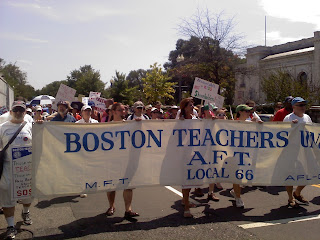 "Would you force reforms on the military and ignore the opinions of career officers? Would you try to change practices in hospitals but ignore the input of nurses and doctors? Isn't it time you put the brakes on the Ract to the Top and explain exactly why this needs to be a race, figure out who the losers will be in your race, and consider what exactly is at the top?

"I am proud to be part of a profession of hard-working, dedicated people who are committed to changing the world for the better. Just by choosing this profession, we have expressed optimism for the future. We believe in change. We cling to hope. We are ready to be partners in reform. Are you willing to send us the help we ask for, instead of politically favored so-called reforms that really don't help us teach?"

Another letter from Jolie Lindley of Henryville Junior/Senior High School in Henryville, IN reads:

"I'll be damned if I teach to a test anymore. While merit pay on the surface is very attractive to someone like me - someone who could be making much more money working in a business environment that would probably be less stressful than my teaching job, I firmly believe it should not be tied to test scores. Pay me more because I stay after school for hours each week grading papers, tutoring students, working with yearbook editors, directing plays, planning lessons, doing research, and improving my teaching. Pay me more because I'm willing to serve on district committees to improve teaching system-wide. Pay me more because I travel at my own expense each year to conferences and workshops to gain fresh ideas and training to be a better teacher. Pay me more because I call and email parents to update them on their child's progress. Pay me more because I care enough about the kid whose parents are very suddenly and unexpectedly divorcing that I make sure to cut him a little slack in class and ask him how he is doing. Pay me more because I have made my classroom a safe haven, one where students drop in to tell me about their day or to ask for advice on how to deal with a problem in another class. Pay me more because I put my life and soul into this profession to the detriment of my personal life because I believe in the teenagers of America."

After all the talk, the march finally began.

They say cut backs; we say fight back!

Whose schools? Our schools! Whose children? Our children!

Marchers were loud, had enough people to look formidable, and had some great signs. The only strange part came as we walked through another protest over Syria. For a moment, schools, Damascus, teachers, Bashar al-Assad, and corporate reform blended together in something of a weird aural mishmash.

Although there were a few more events scheduled after the march, participants all but disappeared after the march was over. Anthony Cody estimated about 5,000 people turned up and hoped for 50,000 next year. Education Week suggested the turnout was closer to 3,000. 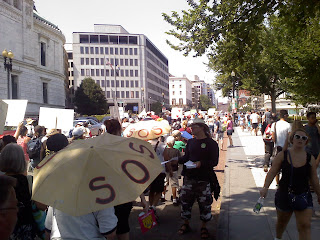 Amidst all this, pundits, citing the participation of union members in this march, claimed the march was secretly funded by unions. (Hmmm - a lot of people were wearing shirts that said, "Union Thug.") This claim, were so many people not deluded into thinking unions are tantamount to pure evil, would/should not be so insidious. That people involved in teachers unions would also resist corporate reform shouldn't exactly catch anyone by surprise. Their presence certainly cannot be taken as evidence that unions funded the march under the guise of a grassroots movement. And even if they did, I'm not sure anyone should really care. Unions should be doing more to resist corporate reform.

Word on the street suggested that people would be gathering around DC this evening to continue the conversations they'd been having all week. Exhausted from travel and a little educationed out, I hung out with a few friends not involved in education and prepared for my flight out of DC tomorrow.

Tomorrow, SOS March participants will meet back at American University to continue to discuss strategies for moving our voice forward. I have to catch a flight and will not be able to attend. 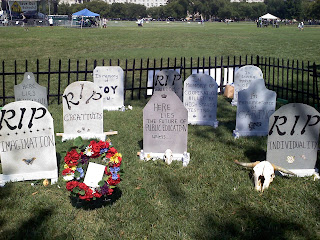 In ending my blogging on the march, I'd like to say thank you so much to all the people that put so much time into organizing this and all the people who've dedicated their livelihoods to the cause of improving public education. I've resisted the idea of having a hero nearly all of my life (I don't know why - maybe some weird ego thing), but after having worked with the kinds of people I've seen push so persistently for quality education in their communities, I can confidently and proudly say that I know exactly who my heroes and heroines are. And they're not famous.