PBIS, Token Economies, and Dreary Estimates of the Human Potential

My school, like thousands of others across the country, is working to implement a system for encouraging positive behavior called PBIS (positive behavioral interventions and supports). If you work in public schools, odds are you’ve worked with PBIS and have some notion of what I’m talking about.

The idea behind PBIS is that our more traditional method of disciplining kids, based primarily on punishing them for wrong behavior, has largely led to negative outcomes like suspension. For many students, responses like suspension merely put them on a path toward dropping out. 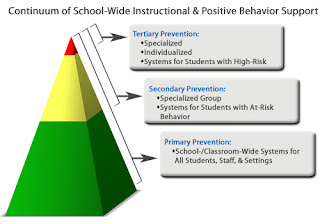 At the bottom of the triangle are tier 1 strategies, which attempt to prevent and resolve minor misbehavior that nearly all students are bound to engage every now and then. Examples of this include arriving to class late, forgetting to bring required materials, or having a minor dispute with a teacher or other student. Tier 1 strategies are geared toward supporting the majority of students (those who want to follow the rules) make sound decisions. They include posting and regularly discussing school-wide norms and expectations from day one.

“We treat one another with respect. We engage with our academics. We act as scholars at all times.”

They also include noticing and affirming behaviors that support those school-wide norms and expectations.

Much PBIS work is necessary in schools and communities. There is an aspect of PBIS that troubles many educators, however.

PBIS systems often advocate offering students superficial, inauthentic rewards for conforming to behavior expectations. A common form of this is the token economy. In the classroom, this might include teachers creating fake money that students receive for participating or turning in homework on time. School-wide, administrators might hand out tokens or points when they see students behaving in the hallways or at lunch. These tokens are then turned in for rewards later, like at an arcade.

What is bothersome about the token economy is that it seems to ignore more meaningful incentives humans have for behaving well in school and community.

Considered in this way, PBIS strikes me as only marginally more progressive a system for discipline than the more traditional, punishment-oriented system is seeks to replace. Like that more traditional system, it seems to be based on a pretty dreary estimate of the human potential. While, compared to a punishment-only system, PBIS has an expanded notion of what drives human behavior, its notions of what those motivators are doesn’t even begin scratch the surface of their depth and possibility. Its assumptions seem dangerously oversimplified.

External motivators do drive desired behavior, but we have to be really careful about their use. This is particularly true as people mature. There often comes a time when the attempt to use external motivators with highly developed people can backfire. I, for one, am likely to feel condescended to when another person tries to exact a behavior from me with an external reward.

The motivators for most people’s behavior are far more nuanced and complex than rewards offered in a token or money-based economy. Relying on rewards that appeal to a person’s baser desires (cookies or pizza parties, for example) communicates that these are the real rewards worth working for in school when the reality is that there are much deeper and more meaningful reasons for participating in a well-functioning classroom or school community.

Furthermore, capturing a student’s interest in a token economy in which the rewards are in no way naturally connected with their behavior might limit them from exploring, experiencing, and understanding a deeper part of his or her self - the part that finds purpose in a sense of vital engagement in work that is meaningful.

When schools have a hard time communicating to students the meaning in their work, it becomes clear why a superficial system of consequences and rewards is required to control their behavior.

Sadly, many of our public schools today are overburdened with mandates to focus on packaged curriculum that would seem dry to any of us. Few people can derive a sense of vital engagement and purpose from preparing for test after test after test. Whatever we were put on earth to do, test-taking it was not. In this context, pizza parties seem about as powerful a motivator as any.

So we can see that meaningful discipline systems are undergirded in schools by work that engages students in purposeful education and helps them see their role in their community and their world clearly. In other words, schools have a greater purpose than preparing students simply to fill job openings and going on to participate in the “real economy.”

Students and citizens are motivated far more deeply by incentives outside the bounds of the money and tokens. Today, the word “economy” is so closely connected with the concept of money that many of us have a hard time separating one from the other. But there are economies that are not based on money. Indeed, before the invention of money, humans still participated in complex systems of give and take that created powerful motivators for people to behave.

Humans are complicated beings with diverse and nuanced reasons for their behavior. At their best, those who live and work in community (like at school) respond most readily to relational obligations they regularly create for themselves and others. This is especially apparent when you ask people who work in social services why they do what they do. The need “to give back” is an obligation that has been created for individuals raised in and by healthy communities. Individuals sense that the positive things that were done for them must be “paid back.” Reciprocity is also borne out of an intuitive understanding that acknowledges and accepts the importance of helping others.

Most schools and many communities in our society, do not spend much time thinking explicitly about the relational obligations that we create (and are created for us) on a daily basis.

They are there, however. You see them most often in families. Most of us would be unwilling to accept money for doing something for an immediate family member.

But they can also be seen between strangers on the street.

A little while ago, I was browsing an independent bookstore that I just discovered. While I was pursuing, a husky man with a big beard came in and picked up ten books that he proceeded to put down in front of the owner, who sat behind the cash register, to purchase. As the owner began scanning each of the books, the man began to speak in a strong Eastern European accent:

“Before, when I was homeless, I stole many books from this store. I sold them on the street for money. Now, I have come back to make up for my transgressions. I would like to buy these books and donate them to your library in the back.”

We feel relational obligations when it becomes clear that we have harmed another person. The harm we do to others stays with us and affects us until we have the opportunity to make it right. This is true for people across the continuum of social-emotional, cognitive development. However, many of those who are in earlier stages of development need significant support in order to see how their behaviors affect other people in order to begin to understand and sense the obligations they’ve created for themselves in harming others. This, I would argue, is the authentic work of school discipline systems.

It seems that an unfortunate number of people don’t understand or believe that these deeper human motivators exist in all people, and especially in students. There is a depressing sense, embedded deeply in our culture, that people are only (or at least mostly) self-interested. Given the opportunity, people will take what they can get for themselves and leave others on their own. Therefore, if we want people to behave, we’re going to have to make it worth their baser brain’s while.

I would argue that this is a byproduct of our peculiar industrialized, affluent, Western, highly competitive capitalist culture; and not innately human.

When people are disconnected from community, and when the deeper bonds of relationship with those around them are either not present or badly bruised, they tend to act more selfishly. They often don’t feel that those around them care about them or can be trusted - other harmful byproducts of our unique culture that values fierce independence (which often leads to intense isolation) and whose notion of success is based on winning the comparison and competition game perpetuated relentlessly by corporate media.

It doesn’t have to be this way in schools.

Students who are mentored in schools where comparison and competition are not highly valued, if at all, and are supported in thinking about and caring for themselves and their peers are significantly more likely to understand and respond humanely to their relational obligations.

Social and relational obligations are the most authentic of human motivators. However, young people need time spent discussing their behaviors and teasing out the obligations they’ve created. Beyond that, they must spend time thinking about how to respond to those obligations in humane and courageous ways.


When schools and systems get too big, when we’ve forgotten what really drives us as humans, when we’re too overworked in schools covering standards and preparing for tests; it’s easier to fall back on superficial systems of punishment and reward, like a token economy. But when we do that, we drastically underestimate the beauty and significance of what it means to be human and the potential that each of us has to grow into a force for peace and justice. We sacrifice a valuable opportunity for offering our young people an actual education.
Labels: Modern Schools On Learning PBIS Purpose of Schooling Small Schools standardized testing