The following essay and commentary is from Retired Public School Teacher Erich Martel. He taught for 42 years in the DC public school system. His writing previously appeared on this blog here. You can contact Erich with questions or comments at ehmartel@starpower.net.


“a number of citizens …, who are united and actuated by some common impulse of passion, or of interest, adverse to the rights of other citizens, or to the permanent and aggregate interests of the community.”

Tomorrow, you will be voting on whether or not to authorize charter schools to operate in Washington State.  I thought I would share some details about charter operations from our experience in Washington, DC, where charters already enroll over 40% of our public school students.

I am a retired Washington, DC public high school social studies teacher. This past year, I have been working with community groups to stop the mayor and DCPS chancellor from closing or transferring to charters 37 public schools. Charters already enroll over 40% of our public school students.  .

Our public schools, especially our urban ones, desperately need improvement, but stigmatizing veteran teachers, stripping them of due process protections by giving control of the schools to self-promoters like Michelle Rhee or to charter operators has not improved our schools.  For more than 20 years, as a teacher, I have exposed mismanagement, including falsification of students’ grades, social promotion and graduation, bullying of teachers, toleration of disorderly student behavior, and undermining academic integrity by putting unprepared students in advanced classes, creation of “credit recovery” shortcuts to receive graduation credits, while refusing to provide students with viable vocational options.

In this letter, I describe how charter promoters and authorizers inflate standardized test results and graduation rates and, just like Ballot Initiative I-1240 intends to do, established an appointed “DC Public Charter School Board” (like the proposed “Washington State Charter School Commission,” “independent” of public oversight, but possessing discretionary authority over public education and facilities funds.  Finally, I appended excerpts from Ballot Initiative I-1240, followed by comments.

1.    Charter schools inflate standardized test results and graduation rates by transferring students with poor behavior and poor academic performance and who are more likely to drop out; therefore:    Charter Schools are Private Schools on the Public Dole.  Here is why:

Thurgood Marshall Public Charter School is a 4-year high school, located in Ward 8, Washington, DC’s poorest ward, and a favorite of the Walton Foundation and other foundations.

If you look at the total enrollment it appears to be a very stable school from year to year:

When one follows the enrollment numbers, broken down by color-coded grade 9 cohorts, it no longer appears stable (the colors allow one to follow each cohort from grade 9 to grade 12): 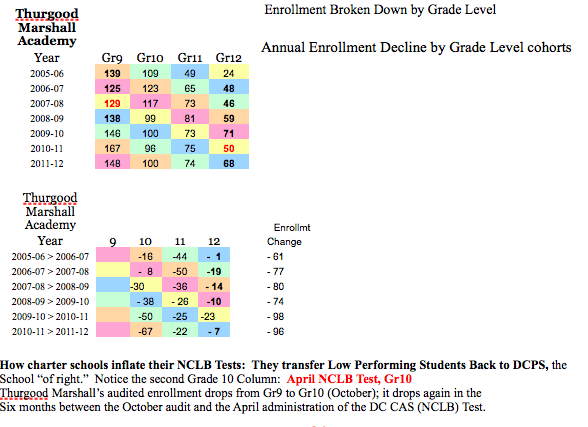 This school loses an average of 48.5 students in the 18 months between the grade 9 October enrollment audit and the April administration of the NCLB performance test, called DC CAS.
Over a five year period (2006-07 to 2010-11), all of the DC charter high schools dropped from their rolls an average of 730 students per cohort in the 18 months between the grade 9 enrollment audit and the grade 10 NCLB test, an annual average of 40% of their grade 9 enrollment.

Although publicly funded, charters act like private schools: They transfer students at any time.

How charter schools inflate their graduation rates and lower the rate of the regular public school:
Look at Thurgood Marshall's (TM’s) grade 9 enrollment for 2007-08:  129 students.  By grade 12, the number had declined to 50.  TM reported 43 graduates to the DC Office of the State Superintendent of Education (DC OSSE) and a 75.44% graduation  rate.  According to that rate, TM had a grade 9 cohort of 57 students (43/57 = 75.44%).  But there were 129 9th graders:  What happened to 72 students?  Why aren’t they reflected in the graduation rate?

They were transferred, most back to DCPS.  How can they do that, if they are “public” schools?

By fiat, they are pronounced to be “public schools,” entitled to public funding, but only the traditional public school remains the school system “of right.”  The local school district or LEA (Local Education Agency) remains the public school that every student has a right to attend (it’s called “school of right”).  Charter schools are NOT schools “of right.”  They can transfer students out at any time. The right to have the final say-so over who attends a school is the defining characteristic of a private school.

The strategy of the charters is to attract students by promising a safer and better academic environment.  By self-selection, it attracts the more engaged parents.  During the 9th grade year and early 10th grade year, the school determines which students it wants to keep and which ones will do poorly on the test and are in danger of dropping out.

After a student has been transferred to the LEA school of right, i.e. the “traditional” public school, he or she is removed from the cohort.  The US Department of Education introduced the Adjusted Cohort Graduation Rate (ACJR) calculation with the graduating class of 2011.  It starts with the grade 9 enrollment, students transferring in are added; those transferring out are subtracted from the cohort.
When there are multiple LEAs in the same geographical district, but only one is required to enroll all students, the other LEAs have the privilege of cherry picking and then getting rid of students who don’t fit in.  That’s what they all do in DC, including much acclaimed KIPP.

The Grand Foundation Strategy:  Shift Public Policy Functions to semi-private, “independent” commissions or bodies that are accountable to a single high official (mayor or governor) and removed from oversight by city councils or state legislatures.

In Washington, DC, under mayoral control (since 2007), the mayor appoints with “advice and consent of the DC Council, the members of the DC Public Charter School Board, the charter school authorizing body and responsible for charter oversight. Once appointed, they function like an independent agency

On the Washington State Ballot Initiative I-1240, the WASHINGTON CHARTER SCHOOL COMMISSION is termed “an independent state agency,” whose 9 members are appointed 3 each by the Governor, House speaker, Senate president.  This is a pseudo-democratic scheme.  No commission members should be appointed without a public hearing before an elected body.

This would be a most unusual commission, whose members are not required to have a commitment to public education, but only to one questionable form of public education:  “All members shall have demonstrated an understanding of and commitment to charter schooling as a strategy for strengthening public education.”  That amounts to a de facto politicized requirement, a “charter test.”  That only shows how bold and confident the charter advocates are.

(Note: These comments are not based on a legal analysis.  They are based on a common sense reading of the ballot initiative.  They are also based on experience in the Washington, DC Public Schools and the expansion of the charter school sector of students classified as “public school students,” which has grown to over 40%.)

[[COMMENT:     Local schools determine funding, in part, on the costs of teachers’ salaries.  If charterS are funded at the same rate as local schools, but NOT obligated to pay the same salaries as the local teacher contract requires, then they will receive more appropriated funds.  Will those funds go to support school programs or administrators’ high salaries?]]

(5) "Charter school" or "public charter school" means a public school governed by a charter school board and operated according to the terms of a charter contract
(3). . .    Charter schools are not subject to and are exempt from all other state statutes and rules applicable to [public] school districts and school district boards of directors, for the purpose of allowing flexibility to innovate in areas such as . . .personnel, funding (i.e. pay).” Code Rev/SCG:crs 9 I-2563.1/12

[[COMMENTS:  This is the real purpose of the charter:  To blame teachers for poor student performance to justify “flexibility” in hiring, evaluation, teachers’ pay and principals’ pay.]]

NEW SECTION. Sec. 206. CHARTER SCHOOL STUDENTS.
(2)If a student who was previously enrolled in a charter school enrolls in another
public school in the state, the student's new school must accept credits earned
by the student in the charter school in the same manner and according to the
same criteria that credits are accepted from other public schools.

[[COMMENTS:  What is to prevent a charter school from transferring a student after the October enrollment audit, that establishes school funding, but before the April administration of the state test that is used to meet NCLB/RTTT requirements?


NEW SECTION. Sec. 208. WASHINGTON CHARTER SCHOOL COMMISSION.
(1)    The Washington charter school commission is established as an independent state agency whose mission is to authorize high quality;
(2)    The commission shall consist of nine members, no more than five of… the same political party. Three … appointed by the governor; three … by the president of the senate; and three … speaker of the house of representatives.
(3)    Members appointed to the commission shall collectively possess strong experience and expertise in public and nonprofit governance; management and finance; public school leadership, assessment, curriculum, and instruction; and public education law. All members shall have demonstrated an understanding of and commitment to charter schooling as a strategy for strengthening public education.

[[COMMENT:  This is the key to the chartering process and goals:  Establishment of a publicly appointed body, that, for all intents and purposes, can operate like a private corporation, all but immune from public and stakeholder accountability.


Even the option of local school board’s having charter authorization power is designed to give a quasi-democratic impression.  Most of the charters will be authorized by the commission.  They are probably already lined up to snatch all but a token handful of the 40 charters that can be authorized.]]

NEW SECTION. Sec. 209. AUTHORIZERS--APPROVAL. (1) The state board of education shall establish an annual application and approval process and timelines for entities seeking approval to be charter school authorizers. The initial process and timelines must be established no later than ninety days after the effective date of this section.
(2) At a minimum, each applicant must submit to the state board:
(a) The applicant's strategic vision for chartering;
(b) A plan to support the vision presented, including explanation and evidence of the applicant's budget and personnel capacity and commitment to execute the responsibilities of quality charter authorizing;
(c) A draft or preliminary outline of the request for proposals that the applicant would, if approved as an authorizer, issue to solicit charter school applicants;
(d) A draft of the performance framework that the applicant would, if approved as an authorizer, use to guide the establishment of a charter contract and for ongoing oversight and evaluation of charter schools;