Police in the Hallways 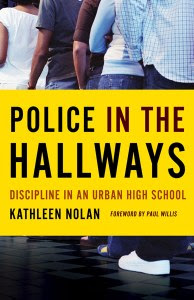 Note: A follow-up post to the one below can be found here.

A little over a year ago, just before I left New York, the University of Minnesota Press sent me a copy of Police in the Hallways for my review. I only just read it, and now I'm kicking myself. The knowledge and insights I gained could have helped me not only this past year, but my entire career.

Police in the Hallways is written by Kathleen Nolan, a lecturer in the teacher preparation program at Princeton, and is the culmination of her work studying a school (which she refers to at Urban Public High School, or UPHS) confronting the effects of poverty, violence, police presence, and zero tolerance policies. Once a teacher in the South Bronx, Nolan returns (to a different school) to try to answer some key questions.

Does a heavy police presence positively impact low-income urban schools by forcing troubled youth to straighten up, and containing and preventing violence? How do students respond to punitive measures to control their behavior? And what are the alternatives when these policies aren’t effective?

Nolan conducts her study in the wake of an order maintenance policy (instituted under Rudy Giuliani and continued under Michael Bloomberg) sometimes referred to as broken-window theory, which increased punitive measures for stepping outside the bounds of both school rules and the law, and created what Nolan refers to as a “culture of control.” Through ample use of student, officer, and administrator voices, Nolan shows how these policies affected the lives of the people at UPHS.

It's clear that one of the most destructive effects of these policies is that as police are added to troubled buildings, disputes begin to arise among school staff regarding who has final authority in school matters: police or school administration. At UPHS, some Department of Education (DOE) staff lost their sense of moral authority. Students listened less to teachers' attempts to reign in their oppositional behaviors as they came to understand police as the only enforcers of law and order.

Interestingly, Nolan notes that John Devine refers to this as the “Marshmallow Effect.” As teachers lose hold of their moral authority, students learn they can push the limits with impunity. Struggling teachers, possibly already dealing with an overbearing system or pedagogical issues, may begin to give way.

Although Nolan eschews attempts to construct a clear and causal relationship between highly punitive, low-income schools and incarceration - the school-to-prison pipeline, as it's known - she acknowledges that one of the most disheartening effects of the “culture of control” is that a heavy police presence, the language and routines of the criminal justice system, and ongoing court summonses (for what often began as small infractions of NYC DOE code) became normalized - i.e. everybody got used to it. Students began referring to detention as “doing time” at UPHS. Even Nolan herself almost began to think about students in handcuffs as a normal part of the school day. (Thankfully, she was able to remind herself that school is done differently in countless communities.) Consequently, at a school where a large number of students performed below grade-level, an extraordinarily punitive discipline system exacerbated many students' already mighty struggle with a negative relationship to school.

Although the heavy police presence both made students and staff feel safer in some ways (e.g. by ensuring fights would be broken up quickly and weapons would be unlikely to enter the building), it exacerbated student troubles in others.

Nolan says that the most significant finding of her study was the numerous occasions on which students would be stopped for minor infractions (e.g. wearing a hats or being late to class) that would lead to eventual court summonses.

The introduction to chapter three:

“Although a variety of policies and practices were part of the culture of control inside UPHS, the most central was the systematic use of order-maintenance-style policing. This included law-enforcement officials’ patrolling of the hallways, the use of criminal-procedural-level strategies, and the pervasive threats of summonses and arrest, which together led to three essential consequences. First, the heavy policing of students on a daily basis and an official policy of police intervention for minor school infractions led to the criminalization of misbehavior. In fact, frequently the police intervention itself triggered the behavior that was ultimately considered criminal. Second, disciplinary incidents that could have been considered violations of the law but had once been handled internally by educators, such as fighting, came to be defined as serious crimes and were often handled through police intervention, summonses, and the arrests of students. Third, as school discipline merged with an ideology of street policing, the boundaries between once-separate domains - the school, the street, and institutions of the criminal-justice system - became blurred. As David Garland suggests, as crime-control responsibilities move beyond the boundaries of the criminal-justice system, institutions of civil society, such as the urban public school, assume explicit roles in the larger societal project of the penal management of marginalized, low-income youth of color.”


Nolan demonstrates through student conversations and investigation into referrals that many students at UPHS developed records with the juvenile justice system for behavior that, in most schools, would have been handled by the school staff. More unsettling, security agents at the school occasionally instigated such events, sometimes talking down to students with a what-you-gonna-do-about-it attitude.

My own experience in a similar school in the Soundview neighborhood of the Bronx confirms this. Security agents, who are paid significantly less than police officers or teachers, were often the primary face of a “culture of control." While some were very friendly with students (perhaps too friendly), others’ primary tool for engaging students was intimidation. It was often anger and distrust that permeated many of their interactions with students.

These negative relationships forced students at UPHS to cope with a school they saw as contrasting starkly with their notion of what school should be, their “idealized notion” of schooling. Nolan documents how students react to a culture of control in an institutional setting by attempting to protect and develop their sense of self.

In detailing students’ explanations for what and why things happen at UPHS, I believe the greatest knowledge Police in the Hallways offers educators is a framework for interpreting student behavior that I’m afraid too many school-based employees lack, particularly those new to working in urban schools. Nolan demonstrates that students have real incentives for acting in ways that, to adults, often seem self-destructive. Indeed, Nolan notes that in doing so, low-income students often reinforce societal stereotypes of race and class in an attempt to validate their sense of self and community in opposition to the institution.

Consider a brief example (Police in the Hallways provides many more). Nolan notes that students identify their apparel as fundamental to their self-expression of identity. (One student compares the DOE requirement that no hats be worn in school to requiring adults to walk around with no shoes.) Those who disobey this policy (one that Nolan feels has little reasoning to justify it) by wearing hats are simultaneously engaging in an act of self-expression AND opposition to institutional rules they view as illegitimate. Furthermore, by refusing to remove one’s hat for a teacher or security agent, students potentially gain favor with peers for proving that they’re not “a punk” AND continuing to resist illegitimate authority. Thus students can carve out a modicum of control in an institution that constantly attempts to deprive them of it.

Highly punitive zero tolerance policies and students' reactions to them have had the effect of repositioning some schools as institutions of control rather than learning, and the impact is disproportionately harmful for poor and minority school children. Nolan writes, “It is a moral outrage that we would take such punitive stand in matters of urban school discipline when so little is offered to urban schools." Rather than relying on increasingly harsh consequences as our only recourse for students in schools who don't conform to our expectations, Nolan calls for a reevaluation both of the policies we impose on low-income schools and also of our responses when students and communities resist them. Importantly, such a reevaluation must be done in light of a nuanced and holistic understanding of the challenges people living in urban poverty in the United States in the early 21st century are facing - e.g. lack of available legal employment, the influence of drugs and gangs, and the highly transient nature of families who live there.

Nolan’s work is extraordinarily timely for policymakers, academics, educators, and concerned members of the public. If you’re looking for an explanation for how low-income schools work, how zero-tolerance policies affect them, or a strong framework for interpreting student behaviors in schools, I can’t recommend Nolan’s book enough.

Again - if you'd like to read more about my thoughts on this book and ways I can relate them with my own experience teaching, you might find my follow-up post interesting.
Labels: NYC Public Schools Teaching in New York Urban Schools