The Struggles of a Small School

The following is part of a series I'm working on about my time teaching in New York City. This post is an edited version of two posts I wrote while in New York: "Could You Make My Job More Difficult" and "If Only We Had Fewer Resources." You can follow the series by clicking on the label "Teaching in New York" at the bottom of this post.

"I work in a small school." It's what I told myself every time I found myself stealing staples from office staplers or drawing Venn diagrams on twenty papers before class because all of the copiers were broken at my small school in the Bronx. It was sort of like, "This is why I moved to New York," which is what I said every time I talked education with a bunch of progressive educators, got tickets to see Diane Ravitch speak, visited authors' apartments for book clubs, or watched people live their lives in the Manhattan skyline at two in the morning. But one was positive, and the other often proved a hassle.

In the past few decades, much has been made of the benefits of small schools. However, new schools that need new systems and cultures are enormous struggles for those who chose to work in them. These struggles come in many forms, are compounded when said schools share decaying facilities with other schools, and are nearly never written about. While I've felt that incredible amounts of meaningful work have often been sabotaged (intentionally and unintentionally) at every level of education in every district I've worked in. Never did I feel as much frustration as when I worked in New York City. Many tasks (mostly those tasks completely unrelated to instruction) required throughout a teacher's days seemed to take far too much time as a result of emerging systems and political ineptitude. Moreover, in New York I often felt teachers were regularly put in precarious legal situations that would make any sane person reconsider their job on a daily basis.  Here are a few examples from my daily experiences while teaching at a third-year international school in the Bronx, which (I should note) I thought had incredibly dedicated and capable administrators.

1. Getting paid was a job in itself.

For the first time in my career, I had to clock in and out of school for 'per session' pay - i.e. money I was paid for taking on additional work at school beyond my regular teaching duties. At the end of the pay period, I had to take my pay stub, fill out a form, get administration to sign off, and hand it to the secretary. What should have been a simple task often turned into a cat-and-mouse game. Busy administrators were often hard to find for a signature, and the secretary regularly left school soon after my last class was over. Also, I had to make copies of the time card, which would be no problem if our copiers weren't regularly broken or being used by someone else. This process often took at least twenty minutes of my day.

2. Going to the bathroom was a hassle.

Student bathrooms were locked to prevent students from hanging out and smoking (or whatever else you might do as a sixteen-year-old in the bathroom between classes). When students wanted to go to the bathroom, they first had to get a key from the main office. The key was unfortunately often stolen. It was not rare for students to leave my room for twenty minutes to go to the bathroom only to come back and tell me they went to three different people in two different offices, and nobody had a key. Students were sometimes told by office staff that teachers had the key; teachers could open the bathroom for them. That would have been fine if it wasn't an enormous liability for me to leave the rest of the class unattended during the school day. I could lend them my keys, but that would have also been an enormous liability. A better functioning system might have been in place if every teacher and administrator wasn't utterly consumed with dealing with other more important parts of birthing a decent small school.

Then there was the matter of the faculty bathroom. The only easily accessible bathrooms were on the first and second floor, but they were student bathrooms. It was, of course, another liability for teachers to use them. Teachers were instructed to use the teacher bathroom on the other side of the building in the basement. This turned out to be quite the Double Dare challenge during the three-minute break we had to change classes (during which time we also had to move materials and cart textbooks from room to room, sometimes on different floors, which required waiting for the elevator). Many teachers risked the liability.

Teachers traveled from room to room at my school because we didn't have enough classrooms for any one of them to ever be empty. In a rush to make it from one class to another, teachers forgot to do a lot of things - e.g. worksheets, to make sure kids cleaned the inevitable mess they made on a daily basis, or to lock the door. As a result, classrooms often looked awful by the end of the day. I usually spent thirty minutes cleaning this up before I could ever start any work after school.

Students were not allowed to be in rooms by themselves. If anything happened, teachers were told they might be held responsible. That seemed unfair because there were non-teachers who used our classrooms. If I locked my door before lunch to keep kids out, I would inevitably be called away from a meeting later in the day to let the Bronx Arts instructors in. Bronx Arts instructors were people our school hired to teach arts classes after lunch on Tuesdays and Wednesdays, and because those people weren't on staff, they often didn't know to lock the door when they left. Even if they had, they didn't have a key to do so.

4. Our building was falling apart. 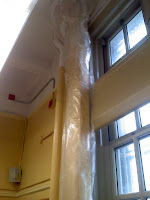 The ceiling in our principal's office leaked water for weeks. Plastic covered the leak for a time. The office did not get heat like the rest of the building, and on one occasion, a portion of the ceiling fell on our principal while writing an email.

In the classroom, teaching could be a hassle when the building pipes made it sound like you were living in a popcorn bag on steroids. I, and other teachers, often yelled at students, not because students were being disruptive, but because the banging coming from the pipes required it.

And then there was the heat. On the first and second floors, it was often outrageously hot. Some kids opened the windows to the freezing air outside, and other kids yelled at them for it. Conflict ensued. Teaching became harder.

5. The students' diets were abysmal. 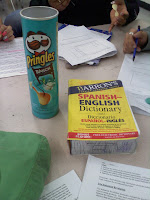 I often wondered if teaching students about the Industrial Revolution was worth my time at all when their brains were made out of Pringles. Many students across the country do not seem to understand, at all, the importance of healthy eating. They're not even aware they're eating poorly. A number of students argued with me over the quality of fast food. "Mister - fast food makes you strong! It's good for you!" I would sigh and try to explain, but that lesson takes longer than a short conversation.

The lunch students received on the SIXTH floor (which meant five or six flights they had to walk up after class) didn't seem to inspire healthy eating either. Many of my students who were already going hungry at home avoided eating lunch at school because it had such a bad reputation. I kept bananas, almonds, and raisins in class to feed my students when they couldn't work because they were so hungry - I still do. This, of course, takes time away from learning.

Our school had limited technology until about April. We had a laptop cart and five projectors (for twenty-five teachers), but when my AP asked me once why nobody was making use of the technology, I rolled my eyes and went into a fifteen-minute monologue about how technology made my life more difficult. If I wanted to check the laptop cart out, I had to get it in the morning and push it to the room I was using that day. I had to worry about losing laptops and being liable. I had to somehow ensure a decent lesson despite many of the students' desire to do anything but work once a computer was in front of them. Finally, I had to figure out how to cart it from class to class for the rest of the day (or at least until I had a planning period) even if I don't want to use it with other classes. The same goes for the projectors, which are pretty hard to use when you don't have any white wall space in your rooms.

Then there was the matter of the teacher computers. The only computers teachers could use were located in a tiny teacher room on the second floor (there were about six working computers for twenty-five teachers). The door didn't lock and it was a hassle to keep students out when teachers weren't using it. The computers had viruses that destroyed more than one of my colleagues work.

7. Tardiness was something of an issue.

We had a big problem with tardiness. Students were only given three minutes to get to class (this is the only way we could figure a legal way to provide the necessary amount of yearly instructional time). Few of of our students (all of them foreigners) were familiar with the concept of bells and tardiness. Many did not understand that being in the hall when the bell rang meant being late. Furthermore, with seven schools in the building, we a lot of bells ring throughout the day. They sometimes seemed pretty meaningless. Depending on what floor you were on, you might have also heard fire alarms going off without purpose or bells that lasted thirty seconds to a minute in length. This all gave students a pretty easy excuse for being tardy.

I found that when we tried to address tardiness, we didn't really have the resources to provide students with consequences. Lunch detentions and tardy sweeps had to be done by teachers willing to give up their lunches and planning periods, as the administration was busy doing observations and having conferences with Gates Foundation reps, DOE reps, and the amazing load of other work they have to take care of. I gave up my planning period and lunch every day for a few weeks doing tardy sweeps and lunch detentions. I decided they weren't worth my sanity.  We didn't have money for a dean to do this kind of thing, and I think my AP was right in spending that money on more teachers rather than more administrators.

Small schools are not automatically excellent.

I think small schools are better for serving low-income communities. But they are neither for the faint-hearted nor mildly committed. My experience suggests they are only for the greatest of educational problem solvers, the most fiercely determined.
Labels: NYC Public Schools policy Small Schools Teacher Stress Teaching in New York