In the Atlanta airport yesterday, I caught myself lingering at the ad below, posted by the Georgia Charter Schools Association: 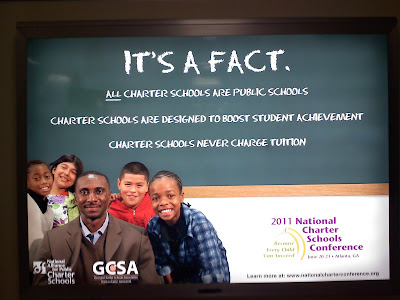 GCSA claims that all charter schools are public schools. If we define public institutions as institutions that thrive on public money, then yes, charter schools are public schools. In the same way, I suppose, major league baseball stadiums are public stadiums. And AIG, Bank of America and General Motors are public corporations. But the use of the term "public" here is far different than it's meant to be understood when it's used in combination with the word "schools," the latter conveying a sense of social equity and equality of opportunity.

What GCSA fails to mention is that some charter schools are run by for-profit organizations, some have corporate sponsorships, many refuse or council out underachieving students or students with special needs, many are run by boards with corporate members who have no experience in education, and their effect is competition among schools rather than collaboration.

Charter schools are not public schools in the sense that most people think of public schools. They are not equally accessible by all students, and the end goal of many of them is not to empower students through education, but to make a profit or boost standardized test scores.

The last line on the ad betrays its real intention, though. GCSA's purpose here is to target parents who might conflate charter schools with private/independent schools - i.e. those parents active enough in their children's lives to pursue a quality education.

While I am ambivalent over the role of charter schools in public education, I am decidedly against campaigns of misinformation and the privatization of education.
Labels: Charter Schools