"We Are One" Labor Rally in Times Square Today

New York Central Labor Council organized a rally in support of unionized labor today in Times Square as part of a series of rallies taking place across New York state. 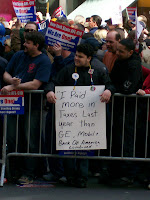 Demonstrating solidarity, workers from across the economy packed Times Square for hours listening to emotional speakers touch on themes of solidarity, inequality, and the moral high ground of the middle class. (More pictures available here.) Major media reports as many as 75,000 public sector jobs are at stake in the near future.

Joseph McCartin aptly explains the forces that have brought such ire to the streets of New York City in the spring issue of Dissent Magazine. 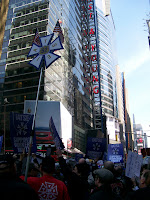 In an article entitled "Convenient Scapegoat, Public Workers under Assault," McCartin disagrees with recent claims made by the media that suggest that public workers are overpaid and overcompensated. He points out that when public workers are compared with their similarly educated counterparts, they are, in fact, undercompensated.

McCartin goes on to describe how teachers have lost the moral high ground, how Rush Limbaugh can get away with saying that public workers produce nothing, and why Reagan's breaking of the PATCO strike in 1981 ultimately led to situation labor finds itself in today.

"Enemies of public sector unions have waited decades for this moment. The swift rise of the government workers' union movement took labor opponents by surprise in the 1960s....

"Back in 1980, the PSRC's David Denholm predicted that the job of 'ridding society of this blight' - public sector collective bargaining - would be a 'long and arduous' struggle." 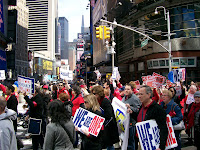 Along the line of fighting public sector unions, this week's Economist did a special report on pensions. In its piece entitled "State of War," it is noted that workers' pensions have become more and more difficult to fund adequately.

"The funding crisis in public-sector pensions is, in large part, the result of post-dated cheques written by politicians in the past...

"In New York, the Manhattan Institute reckons that the taxpayer's contribution to the teachers' fund will have to rise from $900m now to $4.5 billion by fiscal 2015-16...

While the Economist does go on to note that such "fat-cat" pensions in the public sector are not typical, it does not mention that tax rates on the American rich are currently half of what they were in the 1970s.


While it should certainly be clear that neither side of this debate has a monopoly on righteousness or truth, the ire of working people who are being accused of exacerbating the current financial crisis (and asked to make amends for it), while the Wall Street executives who caused it took government funded bonuses, should be more than understandable.
Labels: Teacher Pay Unions