A Smattering of Thoughts

This post doesn't have much to tie itself together.  It's just a smattering of thoughts I've been mulling over the past few days.

1) I find that people with more questions than answers are the ones worth talking to.  If you've got all the answers, go tell them to someone else.

2) Instead of saying that we're firing teachers, now we're "deselecting them."

3) I like the idea of providing teachers with the opportunity to advance in the field of education without requiring that they go into administration.  More districts should offer "master educator" or "lead teacher" opportunities where teachers who demonstrate extraordinary skill in the classroom have time to assist other teachers, coordinate curriculum development, and possibly take on minor administrative responsibilities for more pay and more planning. 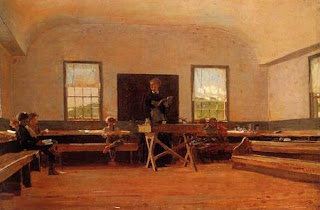 5) I've heard Andrew Rotherham say repeatedly that we don't reward administrators (superintendents or principals) for taking risks in our system.  We reward them for adhering to the status quo.  God is that true.

6) EVERY SINGLE REPORT AND EVERY SINGLE STUDY you ever read about whether a school is any good or whether our kids are actually learning anything are ALL BASED ON STANDARDIZED TEST SCORES.  Our national conversation about the effectiveness of schools, teachers, professional development, about curriculum is being driven by the statistical analysis of economists whose data are not only unreliable but outrageously inappropriate.  As I see it, the whole conversation (with test scores at its base) is a fool's errand.

7) I like the idea of teachers specializing in those things they're best at.  How a system that allows them to do that would work is up for debate.  But we can't expect 3.3 (or 3.7 or 3.1 depending on who you ask) million teachers to all be masters of the trillion skills that teachers are expected to be masters of.  Let's make this a little more realistic.

8) Can we please shut the hell up about merit pay - what a worthless idea.  Why is it that we think that the only way to get people to do good work in this culture is to pay them more.  The greedy bastards that go to work in the private sector so they can make $500k a year while not actually providing any valuable services to society are not, by and large, cut from the same cloth as people who aspire to teach (although there are certainly a few of them running around amongst the TFAers).  While teachers do think they're underpaid, when given they choice, they say they'd rather have a lot of other things in their careers before they want more money.  Let's give them those things instead, like SUPPORT!

9) Movies, books, and articles like Waiting for Superman (pointed out to me by Fear the Fellow) scare me not because they say our system of education is messed up, but because they a) suggest that if we could just create better schools then all of our problems would be solved, b) feature Bill Gates and Michelle Rhee, which means they think private, choice-based systems of education where administrators seek to minimize cost and maximize test scores will make schools better, and c) shroud themselves as thoughtful analyses of our problems in order to make it difficult for the public to see them for what they are: market-oriented polemics.

10) One of the positives coming out of the otherwise intensely destructive push to transform our schools to become more amenable to the interests of the private market is better teacher hiring practice in DC and NYC.  When I applied in DC this past summer, I was streamlined through the process and presented at the top of the list to hiring principals because it was clear that I was a capable teacher.  When I applied in DC in the summer of '07, I never heard anything back, despite calling principals and the central office multiple times.  The same thing happened in NYC.  This summer I've been placed in a program called TRQ Select, which claims it puts 450 of its most promising applicants (out of over 6,000) on principals' short lists and gets 90% of its applicants hired.  This is probably the best chance I have of getting a job given the incredibly awful prospects for teachers out of a job this year.  Other places that I've been applying (FCPS, MCPS, PGCPS, Seattle, San Francisco, Las Vegas) have done nothing for me, and will probably fill most of their vacancies internally and based on seniority, regardless of the candidate's classroom ability.

11) It would be nice to have a job.
Labels: Administrators DCPS Musings policy standardized testing Teacher Pay