Volunteering......But I Wish I Was Teaching

I've known I wanted to be a teacher practically my whole life, at least since I was in elementary school. Every year that went by, I would fantasize (weird, I know) about what I would do differently if I were teaching the class I was in. When I was in second grade in New Mexico, I would steal my teacher's worksheets, bring them home, force my brother to do them, and then grade them. When I was in fourth grade in Tennessee, I remember my teacher telling us the story of the Trail of Tears (Andrew Jackson's removal of the Cherokee from North Carolina and Tennessee to Oklahoma) and learning that I was in love with history. I became enthralled with the American Civil War, bought tons of books/videotapes on it, and stayed up with my dad every Tuesday night to watch the Ken Burns documentary on it. During one spring break, I spent every day watching Glory and Gettysburg over and over again. I would make my mom buy me white boards and chalk boards so that I could bring neighborhood kids into the kitchen, lecture them on the Civil War, and then give them quizzes over the material. I would get out my calculator, decide what their grade was, and if it was failing, I would do the lecture again and give the quiz a second time (giving kids multiple opportunities to succeed before I was even ten years old!). It's no surprise I was that obnoxious kid (the kind I can't stand in my own classroom today) who answered all the questions in sixth-grade social studies class.
Anyway, the point is I LOVE teaching. It's what I've been preparing to do my whole life, and since I went into early retirement, I've been missing it. I've been looking for jobs here and there since I quit, and a lot of them seem really cool. I've thought about being a hall director at Georgetown or going to take the foreign service test for the state department or attempting to get a job on the hill. They all seem like kick-ass jobs, things I would love to be doing, but when it comes down to it, teaching and education is the path I've chosen and it's not something I'm anywhere near being ready to veer away from. I want back in the classroom. (Anybody want to hire me? Just kidding.....kind of....) So I decided to find as many opportunities to volunteer in schools as possible while I'm without a job.
This week, I've been doing a little tutoring with the Latin American Youth Center (LAYC) over at Deal Middle School and Wilson High School. I thank one of my readers for this connection (thank you - awesome idea). It was a nice opportunity to get back to working with kids, which is totally where I belong. I had the opportunity to work one-on-one with a few students who I felt I was really able to help. The kids were GREAT and LAYC seemed to have it's stuff together.
Here were a few things I found noteworthy: 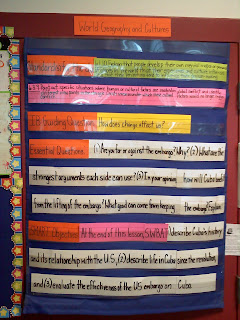 This was put up by the obviously super-organized teacher whose classroom we were tutoring in over at Deal. It's typical of what's expected of teachers in DCPS classrooms. Essential questions, standards, SMART (specific, measurable, attainable, realistic, and timely) objectives, AND (something I wasn't expecting) IB questions. Apparently Deal has a middle-school IB program going on, which I was really impressed with. You generally hear that Deal has a good reputation, but I've also heard from some teachers that it's not quite all it's cracked up to be. 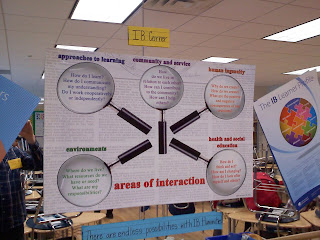 Here's some more evidence that the IB program is at least in effect on the classroom walls. Can anybody from Deal comment on how the IB program is actually going over there? What does it look like in a middle school? I didn't even know that was an option. 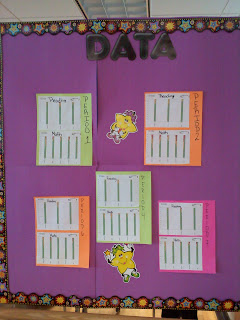 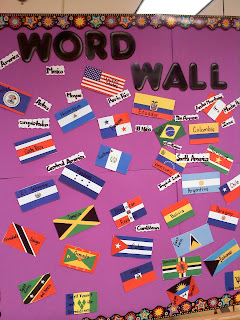 Here are the data wall and word wall (you'll notice that the data wall only ever has math and reading on it because those are the only things DCPS really cares about, which is such a great way to measure student progress - see previous post in order to determine whether I'm being sarcastic). These are required to be on the walls of all the teachers at my former school as well. I must admit, for all the stuff my administrators lied about me being bad at, my bulletin boards would have been valid cause for complaint. My word wall and data wall were worthless. I never found time to update them. Kudos to this teacher. 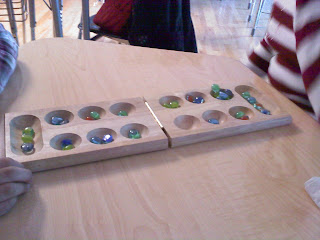 After tutoring, I was beat by a twelve-year-old in this game. What's it called? Much easier to play than I originally thought, but not so easy to win. 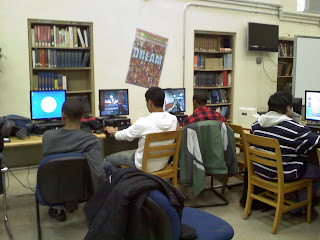 What struck me at Wilson was all of the kids playing Counter-Strike on the library computers. You would have thought you were in a PC Bang in South Korea (for those of you unfamiliar, a PC Bang is like a gaming tavern where people pay to play computer games with lots of other patrons - incredibly popular in South Korea). This was sort of a problem because there were probably twenty computers and maybe seventeen of them were being used for gaming, which meant that the students who actually wanted to use them for homework didn't have all that much access. I asked about this and was told that because anybody is allowed in the library after school, they can't stop the kids from doing what they want on the computers. I was also told that the administration has attempted to uninstall the games but the students just come back in and install them again. I would think you could hire an IT guy to take care of this problem pretty easily. It was kind of hard tutoring students on the computers when the kid next to you was getting so worked up about keeping his hostages alive.
One other thing I noticed while I was out at these schools: they're significantly more ethnically diverse than I've seen elsewhere in DCPS. I'm pretty new to DC. Can somebody fill me in here? I've heard that the schools west of the park are generally much nicer. Why is that? I assume there's a much larger middle and upper class out there? Gentrification? or has it always been that way? Again - I'm new and know next to nothing about DC neighborhoods. I apologize for my ignorance here.
Anyway, I'm headed out of town on Saturday to do a long-anticipated road trip with my mother (who lives in Las Vegas) up to Vancouver and back as sort of a brief vacation from the most stressful five months of my life. When I get back to DC in mid-March, I'll be hitting the job search full force (I think). In the mean time, if anybody knows any awesome schools in NV, CA, OR, or WA I should visit while I have the opportunity, let me know!
Labels: DCPS Musings