DISCLAIMER: The following story is FAKE. It is satire. Do not attempt to find more information on the people or programs mentioned. They are are not real. Some of the quotes were real, but they were made about the Super Bowl, not social service advancements. That's what makes it satire.
Victory was declared in New Orleans, LA tonight.

A federal commission created two years ago to study economic and educational progress being made across the nation released its long-anticipated assessment of Louisiana's Urban Development, Education, and Social Services Department (commonly referred to as UDESS), which was created in the aftermath of Hurricane Katrina.

The assessment was overwhelmingly positive. It rated Louisiana number one in terms of school quality, inner-city and rural economic assistance programs, quality of social services provided, and its controversial (yet unprecedented) index for self-help (a measurement designed to rate social service agencies in terms of a program's ability to provide struggling citizens with a sense of self-reliance rather than a handout).

The head of the UDESS department, John Layton, spoke out tonight, in what will surely be a night to be remembered:

"This has been a long journey for us all. It really goes to show what heart and determination can get you when everyone pulls together to do what's best for each other. And it's been a long time coming for the people of the state of Louisiana, and especially the people of New Orleans and the surrounding suburbs. These people went through hell, and now we finally have something that can give them hope."

According to the federal commission, the UDESS department is credited with bringing Louisiana's school children up as many as four grade levels in reading and math in the past four years as well as adding new emphasis to social studies, science, and the arts. It's also said to be responsible for diminishing the drug trade and the unemployment rate at a time when the national economy is still suffering.

Although it would seem a miracle, and many are still skeptical, many credit the results to the decision of then Governor, Ken Slidell, to combine the departments of Education, Housing and Urban Development, and Social Services into a single bureaucratic entity, now known as UDESS.

"I give Slidell all the credit in the world," says Layton. "If it wasn't for his vision, Louisiana would have been completely incapable of really addressing the problems that so many of our citizens face on a day-to-day basis. Education, the economy, drug addiction, crime: these issues do not exist in a vacuum. They all affect each other in one way or another. And when we began to look at the big picture, and began to treat our problems as multi-faceted, and began to share information and forge initiatives with what were once different departments, that's when we really began to see change occur. Now that the commission has validated the good work that we've done in Louisiana, I hope this can serve as a model for the rest of the country."

Indeed, it may be that UDESS-type agencies begin sprouting up across the nation. Texas, Mississippi, and Arkansas all have bills pending in their state legislatures that call for the formation of something similar to UDESS, and many more states have expressed interest.

It's not just the bureaucrats that get to celebrate, however. When the results were read on the news this evening, the entire state went crazy. Louisiana citizens literally ran out of their houses to celebrate with their neighbors at the news. Many of them had seen their lives transformed by the measures implemented by UDESS, but few had realized what an amazing feat their state government had really pulled off. 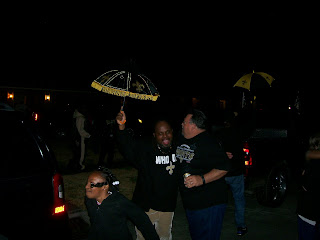 "My wedding day, my college graduation, the day my daughter was born - those were all great days," says lifelong Louisiana resident, Jayden Allen of Westwego, LA. "But none of them even compare to this day. I just can't believe it. It's a miracle!"

Feelings were mutual along Bourbon Street in New Orleans.

"We did it! I can't believe we did it! Nobody thought we could do it. Every step of the way people doubted us, but we did it. This is the greatest day in Louisiana history," said New Orleans resident, Darla Fuller, as she celebrated on a balcony overlooking the famed street in New Orleans mostly known for its Mardi Gras festivities.

Many of the people reacted to the news in shouts of celebration, and even more were hard-pressed to hold back tears.

The days of Louisiana's reputation as a backwater for education and social services seem to be numbered. It's picked itself up, done the hard work required to rebuild itself after the disastrous Hurricane Katrina, and come together to prove that a little hard work and honest democracy can still go a long way in America.

On an unrelated, and much less important story, the New Orleans football franchise won its first ever championship.

When asked what he'd do after the victory, the team's MVP quarterback, Drake Breeze said, "Wow, what a great day for Louisiana and New Orleans. Not only did UDESS turn around our social situation, but we also got to win a football game. What will I do next? Well, right now I'm just going to soak in the good news. It still hasn't really hit me that we really managed to lower unemployment by that much! But after I've had time to digest, I'm going to look for a job until I have to hit training camp in the summer. $50,000 a year is pretty decent money for an entertainer, but it doesn't quite provide enough for my family to live the lifestyle they want."

A few people were pleased with the football victory, but in the wake of the news about UDESS, the majority of Louisiana's residents didn't even notice the game.
Labels: Utopian News